itel S16 is the direct successor to the S15 launched in 2019, and brings new design and the latest Android 10 to itel S-series. The display is a 6.5-inches full-view screen with 480 x 960 pixels resolution and a dewdrop notch, housing the selfie camera.

The device comes with a triple camera sensor at the back, combining 8 MP Main snapper, 2MP depth and a third AI sensor, while a single 8-megapixel selfie lens is kept in the notch upfront.

You are also getting a rear placed fingerprint scanner, support for dual 3G SIMs, has 4000mAh battery and runs on Google Android 10 (Go Edition) out of the box.

The Itel S16 may not pack a substantial hardware upgrade, but it does feature a more refined design when compared to its predecessor. I tell made refinements, that make the S16 more appealing aesthetically.

On the rear, we have got a camera module housing triple cameras and an LED flash. Also on the rear, you will find a capacitive fingerprint sensor and the Itel Mascott, which indicating its an Itel smartphone.

Upfront, we have a 6.5 inch IPS LCD display with a drop notch housing its selfie camera. This display has a resolution of 1600 X 720 Pixels.

itel S16 made some effort in making the Itel S16 more robust. In comparison with its predecessor, we have more cameras on the rear and a higher resolution camera upfront.

The rear camera setup comprises of an 8MP primary camera, a 2MP Macro camera, and a depth camera. For selfies, we now have a 16MP front shooter, as opposed to the 5MP camera on the S15.

This camera setup may be nowhere near the most powerful in the bunch, but its a substantial upgrade that will appeal to enthusiasts in search of smartphones in this price range.

Comparing the Itel S16 to the previously released Itel S15 reveals a not very substantial upgrade. In a nutshell, enthusiasts will be deal with fairly the same performance hardware.

Onboard is a Quad-core Spreadtrum Unisoc SC7731E Processor, 1GB of RAM, 16GB of internal storage, with the option for storage expansion via Micro-SD up to 32GB and a 4000mAh battery, which is bigger than the 3000mAh on the S15.

On the software side, the Itel S16 runs its interface on top of the Android 10 (Go Edition) operating system.

Internet connectivity on the Itel S16 is capped at 3G, which means enthusiasts won’t have the luxury of 4G and 5G internet speed.

itel S16 flaunts a stylish waterdrop fullscreen design that looks and feels beautiful in your hands. It comes with a 6.5” HD display having a 490X960 Pixels resolution further accentuating its appearance. Owing to a higher screen ratio, the phone brings in a joyful visual experience to its users.

Another thing you cannot help noticing is its super slim design. Measuring just 8.3 mm in thickness and weighing around 164 grams, S16 is one of the slimmest smartphones launched by itel. The rear panel has smoothed curves that make it fit perfectly in your hands. You’ll love the way it has been designed to be super comfy for one-hand operation.

Impressive Camera with a Depth Sensor 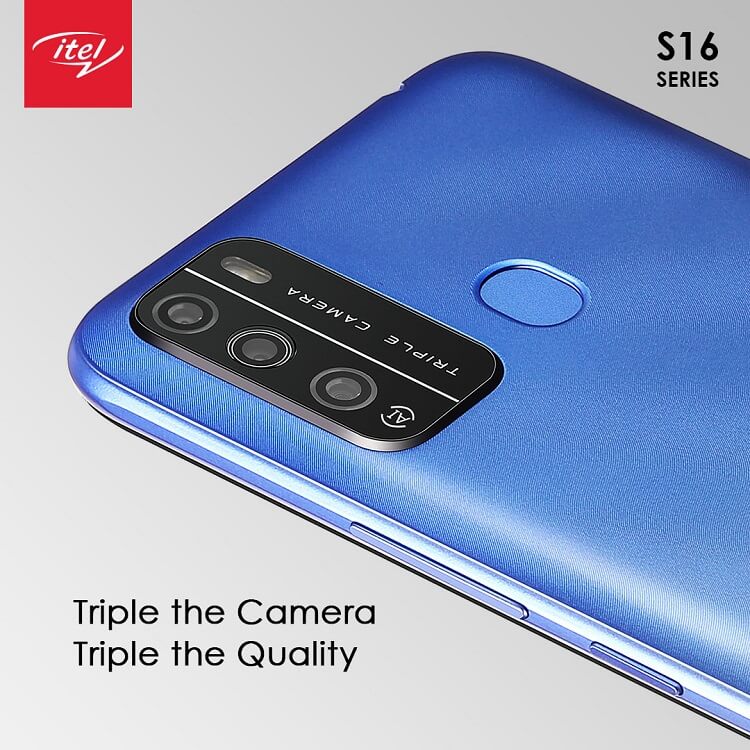 S16 comes with a “rectangular” shaped triple-camera set up consisting of an 8MP main and 2MP Macro lens plus a depth-sensor that gives you a better quality of pictures and videos you shoot. Both the rear and Selfie cameras have portrait modes to enable you to adjust the lighting and details. Balancing the brightness and shadow will be easy and interesting.

itel S16 mobile is a perfect choice for selfie-lovers. It has an 8MP front camera, complemented by AI Face Beauty 3.0 that promises decent quality for selfies. Blending the latest artificial intelligence (AI) technologies augmented reality (AR), and human touch learnings, AI face Beauty 3.0 is great to adjust the lighting environment, facial features, colors and details as per your individual needs. Ultimately, the pictures turn out to be special. 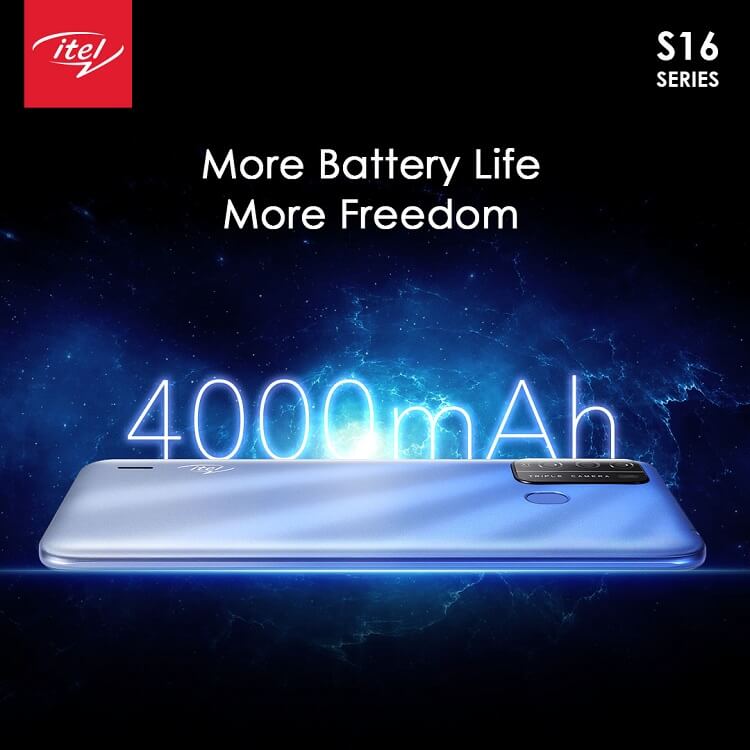 Another notable feature of itel S16 mobile is its powerful 4000mAh battery with AI Power Master. It has been built to last for a whole day even with heavy consumption. While watching the video continuously, it can last up to 7 hours. For normal usage, the battery will easily go up to 80 hours. Thanks to the AI Power Master, the battery saves power intelligently, and this can help increase battery life by up to 35%.

Billed as a lightweight version of Google Photo, Gallery Go in itel S16 series is sure to impress you. Well optimized for S16 series, this offline gallery is smaller in size and consumes lesser data while managing your files and photos immaculately. It has a function to automatically categorize your phone pictures into People, Selfies, Nature, Animals, Documents, Videos, and Movies.

Go Gallery also packs in some photo editing tools which come in handy to enhance the quality and look of your pictures.

itel S16 operating system has a custom galley called AI Galley. It packs in an array of features and editing tools to help you manage the pictures, videos, and files in a streamlined way. Its ‘Optimize Function’ can detect blur images, dark photos, and similar photos. This helps you delete them and create fresh space in your gallery. Also, you can identify pictures as Whatsapp images and Facebook images segregated as per their source of downloading. A photo editing tool can add filter, crop the photos, add text, watermark, and even bokeh. Each tool is easy to manage.

The phone is powered by the Spreadtrum UNISOC SC7731E, and brings in the augmented Android 10 to Itel smartphone series. It comes with 1GB RAM and 16GB storage (expandable up to 64GB). In its SIM tray, Itel s16 packs in a dual nano-SIM (standby) slots as well as a dedicated microSD card slot.

Swap your old phone to a new itel S16

The full specifications and silent features of iTel S16 are detailed in the table below.

Our Rating of itel S16
The itel S16 comes in as a successor to the Itel S15. It features the same RAM size and processor as the S15. However, itel is offering users a better camera setup, bigger battery, and updated software, which pushes the S16 as a successor. If you are looking for a good phone that is within budget, please you can checkout the price of itel S16 on Mchris and pay on delivery.
Design
6.5
Features
7
Camera
7.5
Battery
7.5
Display
7
Storage
6
Connectivity
7
Performance
7
Usability
7.5
PROS
CONS 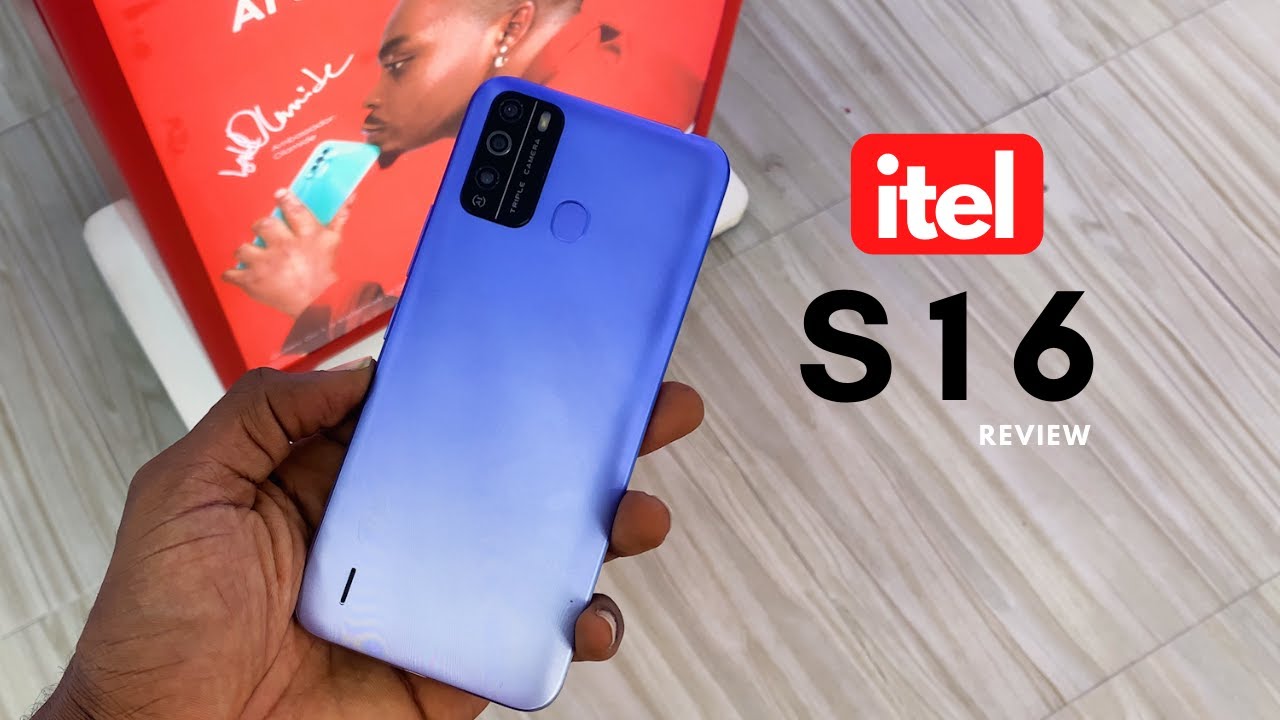 ₦30,000.00
Add to cart
Added to wishlistRemoved from wishlist 0
Add to compare
Galaxy A